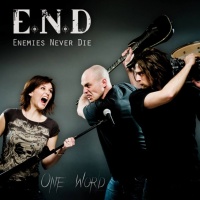 E.N.D. Enemies Never Die se présente :E.N.D is created in March 2010 by Lilly, Tom and Yohann. They have a clear vision to create simple music, straightforward but extremely effective. Strong of a decade of musical experience the band starts to compose new songs aligned with their influences : Bullet For My Valentine, Stone Sour, Halestorm ... a taste of Black Stone Cherry as Roadrunner Records has defined themselves. The band has added in the line-up a new guitarist Martial that has been touring across different countries in order to emphasis energy that they could deliver live. The band released their debut album "One word" on April 30th 2013 and started immediately to promote it on stage. E.N.D was nominated to show its live talent in the biggest Easter Festival in France "Le Printemps de Bourges" in April 2013. They showed already a strong maturity and force that pushed the public to respond in the best way. A massive series of concert has started, It is the beginning of a journey that E.N.D and their fans will never forget ...